I’ve always had a fascination with the human-dog bond…

So much is possible if we are open to hearing what they are communicating to us! It’s my passion to help humans and their dogs learn to coexist in a way that builds a lasting and trusting bond. I’m committed to using positive training techniques that are based in science to do that.

I’ve worked with a range of dogs with varying needs: families with new puppies learning that the modern world isn’t a scary place; adolescent dogs whose humans are having a hard time with their teenager transitioning into adulthood; and reactive dogs who need help working through their emotional trauma. With each of these situations, I’m always amazed with how much we can learn from our dogs by learning to read their behaviors. I strive to teach the human half of the relationship the tools to understand this language so that they can offer their dogs help, give gentle guidance, and build a fulfilling relationship. 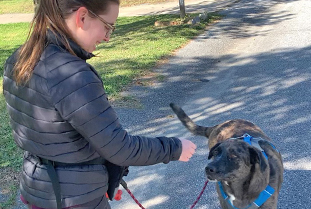 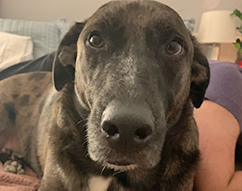 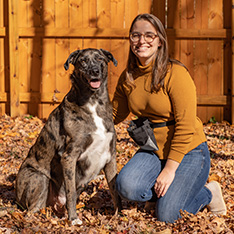 My own journey as a dog trainer began when my dog Leo developed fear issues and became very reactive with strangers and other triggers. I was shocked and heartbroken to watch my sweet boy go from a confident, happy puppy to a dog who saw the world as a scary and threatening place.

But I was determined to get him the help he needed, and so I dove in all the way. 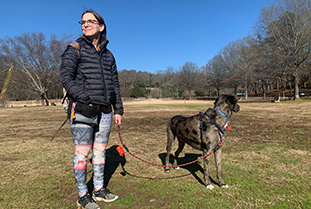 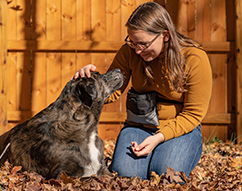 My connection with Leo grew and grew. I saw him become more comfortable in his own skin, learn to feel safe again, and, most importantly – trust me. Helping Leo become confident again was one of the most meaningful things I’ve ever done, and it inspired me to want to help other families and their pups.

I can’t wait to help you and your pup undergo the same transformative journey I’ve been on with Leo – it brings me joy every day to see our clients and their dogs start to connect on deeper levels, and to help empower dogs to lead happier, stress-free lives. 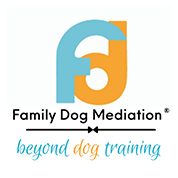 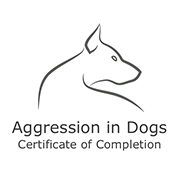 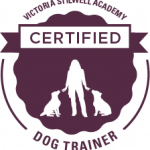 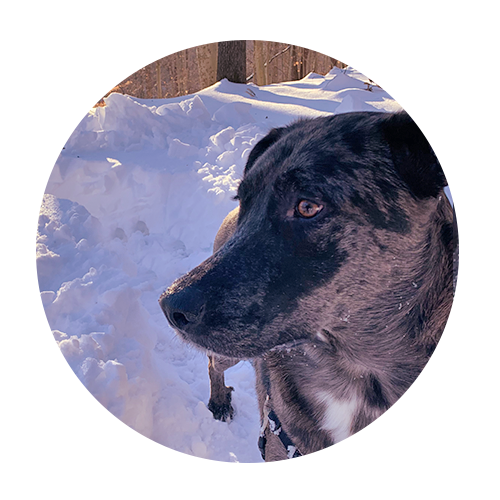 Leo is a sweet, silly, wiggly giant. At about 110lbs he’s got a lot of weight behind him but he mostly just uses it to wiggle his whole butt when saying “Hi”. He’s picky about his group of people and dog friends but once he gets to know you, you’re a part of his inner circle who gets the wiggle butt and the toothy smile/snarf greeting every time. He’s a treat fiend and will do pretty much anything for a piece of hot dog. His love of food has been a blessing in disguise while we’ve worked on some issues that he has with reactivity. He’s gotten to eat little pieces of pizza after disengaging from other dogs, shredded bits of chicken for checking in on walks in new places and little cubes of cheese during introductions to new people. He’s a foodie, for sure.

This website uses cookies to improve your experience while you navigate through the website. Out of these cookies, the cookies that are categorized as necessary are stored on your browser as they are essential for the working of basic functionalities of the website. We also use third-party cookies that help us analyze and understand how you use this website. These cookies will be stored in your browser only with your consent. You also have the option to opt-out of these cookies. But opting out of some of these cookies may have an effect on your browsing experience.
Necessary Always Enabled
Necessary cookies are absolutely essential for the website to function properly. This category only includes cookies that ensures basic functionalities and security features of the website. These cookies do not store any personal information.
Non-necessary
Any cookies that may not be particularly necessary for the website to function and is used specifically to collect user personal data via analytics, ads, other embedded contents are termed as non-necessary cookies. It is mandatory to procure user consent prior to running these cookies on your website.
SAVE & ACCEPT 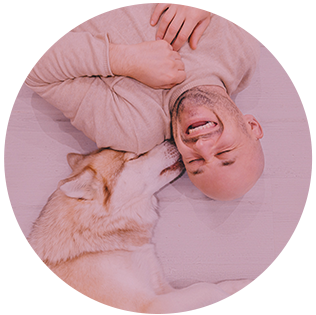 Ready to connect with your best friend?

10 things you can do right now to end bad behavior and forge a deep connection…without training, guilt, or “dominating” your best friend.

You have Successfully Subscribed!